Skip to content
You are here
Home > Medical Instruments > What is Gamma Knife ? 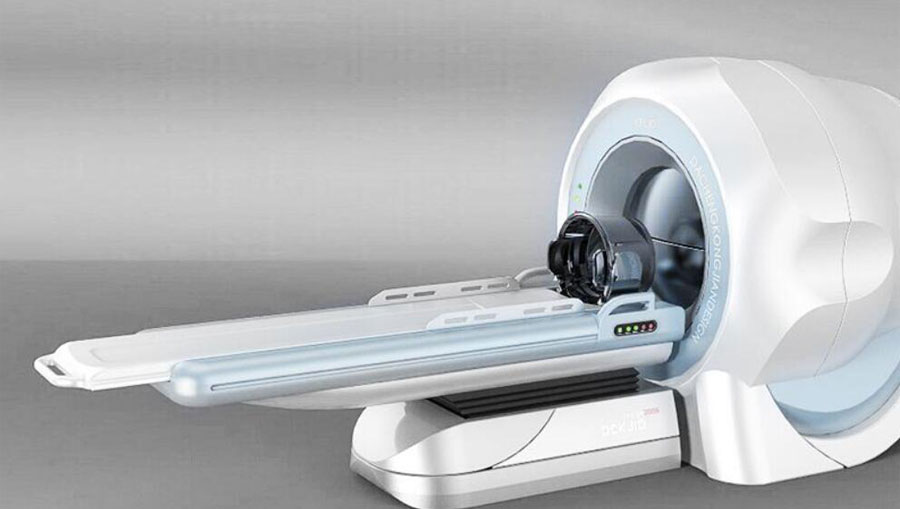 Gamma Knife is the main treatment method of stereotactic radiosurgery. It is based on the principle of stereotactic geometry to selectively determine the normal tissue or diseased tissue in the brain as the target, and use cobalt-60 to produce The gamma ray is focused and irradiated in a large dose at one time, so that it can produce focal necrosis or functional changes to achieve the purpose of treating the disease.

Working principle：
Gamma-ray head stereotactic radiosurgery system (referred to as head gamma knife) is a large-scale equipment that integrates stereotactic technology and radiosurgery technology, mainly for the treatment of craniocerebral diseases. The advantage of less damage. The equipment is expensive and requires high application technology. [2]
Due to the special distribution of radiation in the target area, the surrounding tissue is hardly affected, and the necrotic edge of the target area is like a knife cut, so it is called “gamma knife”. The treatment principle of Gamma Knife is similar to the focusing process of a magnifying glass. Put the magnifying glass in the sun, and a dazzling light spot will be formed under the magnifying glass, that is, the focal point. Out of focus, people feel as normal, but at focus there is enough heat to set some objects on fire. Of course, in order to focus in the human body, it is impossible to use sunlight rays, but must use penetrating high-energy rays, such as gamma rays. At the same time, focusing gamma rays is not as simple as focusing by a magnifying glass, but a combination of It can be realized by a series of modern technologies such as nuclear physics, computer, biological radiation, electromechanical and so on.

Development History：
In 1951, Professor Leksell of Sweden first proposed the idea of ​​radiosurgery and designed the first radiotherapy equipment. The first-generation brain stereotaxic instrument on the C-shaped arm of the guide device is connected to a medium voltage X-ray tube, so that the emitted X-rays rotate along the C-shaped arm trajectory, so that the rays converge on the central target point. The first patient treated was trigeminal neuralgia, and the target was the semilunar ganglion of the trigeminal nerve. The patient achieved good long-term pain relief and no longer needed surgery. On this basis, Leksell cooperated with the physicist Larsson to use the proton beam generated by the cyclotron and the early linear accelerator as a tool for radiosurgery, and conducted a series of animal experiments and clinical studies. And the application of different radiation has created a good start.

The first Gamma Knife was successfully developed in 1967. It used 179 Co-60 radioactive sources, fixed in a hemispherical helmet, and equipped with three kinds of external collimators that could be changed, so that the diameters of the beams were 4, 4, and 4. 8. 14mm. The second Gamma Knife was installed in Karolinska Hospital, Sweden in 1974, the third in Buenos Aries, Argentina in 1984, and the fourth in Shiffield, UK in 1985. The radioactive cobalt source for the latter two Gamma Knives was increased to 201 indivual. In 1987, the fifth Gamma Knife was installed at the Pittsburg University School of Medicine in the United States. A collimator with a diameter of 18 mm was added, and a computer system was introduced so that different collimators could be comprehensively applied in dose planning according to the size of the treatment volume. Since then, Gamma Knife has been perfected and gradually expanded to all parts of the world.

Most of those in use are Leksell B-type gamma knives, which consist primarily of a hemispherical central body with a built-in cobalt source, an external collimator, a couch, a console, and a dose planning system. 201 cobalt sources are distributed in the central body and are hemispherical, each source body is 20mm long and 1mm in diameter. It is also known as cobalt needle, and its activity is 30Ci when it is first installed, with a total of about 6000Ci. The absorbed dose rate was 3 Gy/min measured at the center of a 16 cm polystyrene phantom with an external collimator of 18 mm. Because the half-life of 60Co is 5.27 years, the cobalt source should be replaced after 5 to 7 years of use to ensure the therapeutic dose rate and save treatment time. The Leksell Type C Gamma Knife was born in 1999, combining advances in dose planning with robotics, with key features including: Automatic Positioning System (APS), helmet switch, helmet runner, coordinate micromanipulator, and color-coded Collimator and stopper. The major breakthrough lies in eliminating the need to manually adjust the coordinates in the multi-isocenter dose plan. The automatic positioning system will automatically adjust the patient’s head and move it to the corresponding coordinate position according to the target coordinates in the dose plan established by the computer. The first Type C Gamma Knife was installed at the University of Pittsburg, USA in 2000.

In July 1994, the world’s first rotary gamma knife was born in Shenzhen, China, using 30 60Co radioactive sources, loaded in a hemispherical helmet. The second-level collimator is a coaxial hemispherical helmet with 6 groups of holes, 5 holes in each group. The arrangement of holes is consistent with the radiation source. The positive position can form beams with diameters of 4, 8, 14, 18 mm, respectively. In the non-treatment state, the radiation source pair can be shielded to reduce radiation contamination. During treatment, the radiation source and the collimator rotate together to form a rotating and focused high-dose area at the target.
The main advantages are:
1 High degree of automation, no need to manually replace the external collimator;
2 Using the means of rotating focusing, the radiation is more evenly distributed in the normal tissue outside the target area, and the damage to the normal tissue is reduced;
3 A shielding rod is added to the collimator to further reduce radiation leakage;
4 The number of cobalt sources is reduced, which reduces the cost of installation and source replacement.

During the treatment, the lesions were firstly positioned with a stereotaxic system. The stereotaxic system is a special coordinate system. After the patient is relatively fixed in the stereotaxic system, CT and MRI scan the lesion to show the relative position of the lesion and each reference point of the coordinate system. After positioning, the treatment planning system automatically processes the images scanned by CT and MRI, reconstructs the three-dimensional shape of the skull, the lesion and its surrounding tissues, designs the treatment plan according to the prescribed dose given by the doctor, and calculates the number of targets required for treatment, Target coordinates, irradiation time and collimator number used for each target, etc. After receiving the relevant parameters of the treatment planning system, the electrical control system sends each target point to the focus in turn, and opens the corresponding collimator for quantitative irradiation. [1]
The main course of treatment includes :
1 Fixed stereotaxic frame on the patient’s head;
2 Imaging scans (CT or MRI);
3 Develop a treatment plan and determine the prescribed dose;
4 to implement treatment;
5 Remove the stereotaxic frame. The whole process takes about 2~4h.

The advantages of Gamma Knife in the treatment of tumors are very obvious. Specifically, it has the following characteristics :
(1) The treatment is simple: it takes about a few minutes to dozens of minutes.
(2) Convenience and safety: The patient does not lose hair, has no serious adverse reactions, does not need blood transfusion or medication after surgery, is not restricted by diet and activities, and generally does not need to be hospitalized.
(3) Accuracy: The whole process of treatment is controlled by computer, which is reliable, accurate, accurate and safe in curative effect, and normal tissue is not damaged.
(4) No obvious surgical contraindications: hypertension, physical condition and heart disease, the treatment process is not affected by co-existing diseases such as age, diabetes and pneumonia, no surgical contraindications, especially suitable for those who cannot tolerate surgery or anesthesia, One-time treatment for multiple metastases.
(5) No anesthesia required: no special preparations, medication, no trauma, no bleeding are required, and the operation is performed under awake and painless conditions.
The premise of ensuring that Gamma Knife can accurately and effectively treat tumors is the accuracy of Gamma Knife focus, the focus dose rate, the absolute dose of the focus, and the relative dose of the reference point. These parameters are the basic prerequisites for ensuring the treatment of patients. Various mechanical, nuclear physics, dose, planning system and other parameters have been repeatedly measured and verified, and the treatment parameters have been measured and verified in combination with actual patients before they are used in clinical practice.